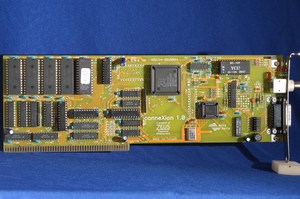 This card was basically a Commodore A2065 clone which had a slightly newer revision of the AMD chipset. There is actually a jumper on the card which could be used to switch between Commodore 2065 mode and native mode. The card could use the same SANA II device driver which was used for the 2065 with a newer version of the driver being written by Heinz Wrobel for increased performance and compatibility. The card has two network connectors, BNC and AUI and LEDs which showing the network status.