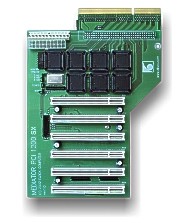 The Mediator 1200SX is designed to be used with one of the following tower systems.

At the time of writing, the following cards/chipsets are supported:

Copyright Notice:
Parts of this page are © Elbox and are used with permission for inclusion in "The Big Book of Amiga Hardware"

Incompability with GVP 1230 "It looks that there are some GVP A1230 cards of a special series, which does not allow to configure any other cards in the Zorro space. There are some reports that there was a batch of GVP cards, which have such "feature". If this is a card from this batch it will also not work with any Zorro II or Zorro IV busboard. Elbox has not had any GVP A1230 card in their office. Maybe they are equipped with a jumper (soldered or not on the board), which determines if this turbo card allows or not to configure any other boards during the Amiga autoconfig cycles."